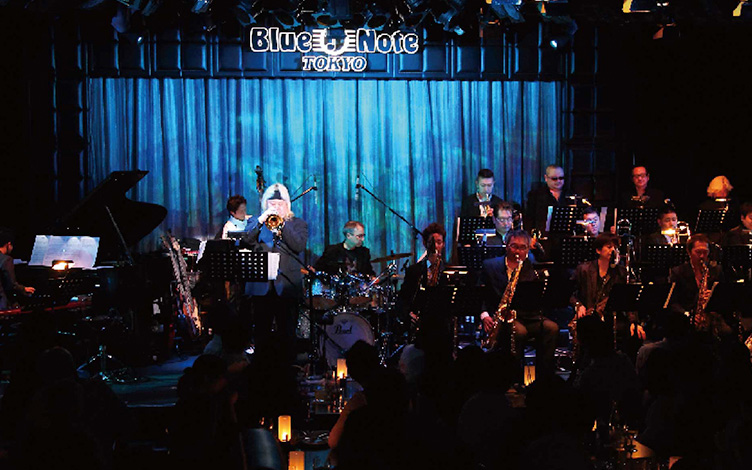 “Miyashiro’s trumpet work is, in a word, breathtaking.” AllAboutJazz.com
Brace yourself for a supercharged evening of electrifying big band jazz featuring an assembly of the finest jazz musicians in Japan. In their first ever show here, the 18-member strong ensemble performs beautifully orchestrated pieces with guest vocalists, Singapore’s very own Nathan Hartono and Asako Toki from Japan.

Soulful, scintillating and spontaneous, every performance by Blue Note Tokyo All-Star Jazz Orchestra is a radiant showcase of virtuosity and personality, where members take turns in the limelight to show off their individual skills while performing pieces that they have arranged together.

Formed in 2011 by the prestigious Blue Note Tokyo club, the ensemble is led by Hawaiian-born trumpeter Eric Miyashiro, a former child prodigy and now highly sought-after musician (for his high register and style reminiscent of his idol, the late trumpeter Maynard Ferguson), composer, arranger and producer. Eric has performed with world jazz legends such as drummer Buddy Rich, trumpeter Dizzy GIllespie and clarinettist Woody Herman, to name a few. He is also the leader of EM Band and an International Yamaha Performing Artist and Clinician who designed the Yamaha Miyashiro Custom Model Bb Trumpet.

Blue Note Tokyo All-Star Jazz Orchestra made its circuit debut at Jazz Auditoria 2013, a festival organised by Blue Note Tokyo, where they shared the stage with prominent jazz pianist Makoto Ozone. In 2014, it made its first international appearance at the famed Montreux Jazz Festival in Switzerland, for which it received sterling reviews. Last year, it performed at Asia’s largest jazz festival, Indonesia International Java Jazz.

Since 2013, the ensemble has performed with some of the world’s leading jazz musicians, including Pat Metheny, Arturo Sandoval and Richard Bona.

On the occasion of their 50th Anniversary, Yamaha Music (Asia) is privileged to collaborate with Esplanade on this special concert, featuring trumpeter and Yamaha Artist Eric Miyashiro.Special Movie on YouTube

Sorry, the comment form is closed at this time.